On Saturday Oxford’s Men’s Canoe Polo A Team played the first tournament of the National Division 4 league at Cheltenham. This is part of the national frame work organised by British Canoeing attended by almost all clubs in the country (most of whom aren’t university teams), with Oxford being the only university team in division 4 south west. Due to a smaller than usual number of teams in the league it is to be played out over 3 Saturdays rather than 4 resulting in 5 matches a tournament rather than the usual 3 or 4, so with Oxford having brought no subs it was going to be a grueling evening. 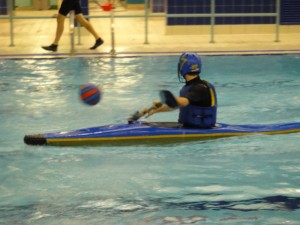 After a slightly manic warm up, where all six teams tried to use a 33m pool at once, Oxford was in the first match against Dragon B from South West Wales, a team which included 2 players from the GB under 21 women’s squad. A 2 nil loss was all that could be managed but given the 8 nil thrashings Dragon inflicted on a number of the other teams this was a good start. 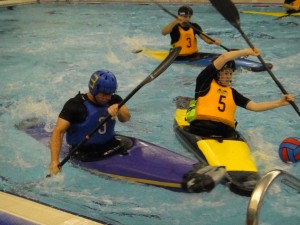 Thomas Leissing in for the tackle

One game off and back on again this time against the Celtic Warriors strong contenders to lead the tournament overall, however they struggled. At half time the score was 1 nil to them before a goal from Matthew Coulson brought the equaliser. Play for the next five minutes was pretty even with both sides having a number of attempts on goal. However a last minute ruckus in our zone went against us and they were given a free shot right under our goal leading to a final score of 2:1. 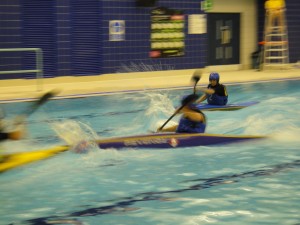 Two games off this time where some food was consumed and Chris Booth and Sophie Louth manned the table before taking on Avon E from Bristol who had some new body protectors in bright orange and green (they are reversible so you don’t need bibs). The first half started well for Oxford with some good attacks on their zone and a number of shots on goal, some of which went high but the majority of which were saved. However Avon also had a number of attacks on our goal and although they had some issues with the rule which prevents attackers from touching the keeper one of their three goals stood, so one nil down but fighting. 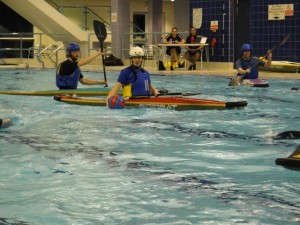 Sophie Louth setting up for the goal restart

Sadly at half time Avon established Oxford’s greatest weakness, the team has lost the goalkeeper from last year and haven’t yet trained a new one, so Jack Laverick stepped in but without any training and due to Oxford’s lack of a permanent goal to practice with Laverick had his work cut out. Oxford progressed well at the start of the second half setting up an attack and getting Booth in position for a beautiful shot off the keeper’s paddles and into the top of the goal. This seemed to spur Avon on and they mercilessly abused our lack of keeping strength taking a higher number and riskier shots than they had done previously (or would be wise against a strong keeper) and left us with a final score of 5:1. 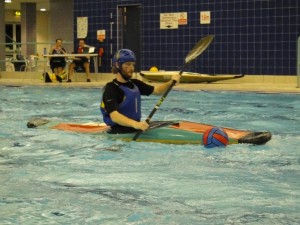 Two more games off and then a game against Bridgend C; one of the only teams to bring subs (or children or supporters). This was a very wet game for Oxford and Bridgend due to binning; the legal practice of capsizing a player who has the ball. Thomas Leissing started the games with a strong sprint winning the ball (as he did in most of the other games) and with Booth who had supported was able to press into the Bridgend zone rapidly and put their defense under strong pressure, with Louth coming in to take a shot which was saved but the resulting corner was converted into a goal by Booth. Booth and Louth worked together as chasers routinely taking the ball of the Bridgend players, resulting in Leissing and Coulson repeatedly sprinting from defense to attack as their superior masses are best utilised in the zones, it is just a shame they are at opposite ends of the pitch. 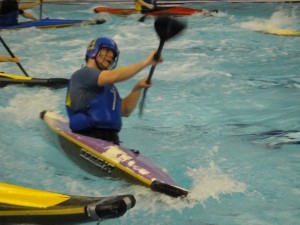 Matt Coulson trying to bin himself

In the second half Booth attempted to grab a loose ball to his side by diving on it but although the self binning tactic didn’t quite work Laverick picked up the ball and passed it back to Booth who had promptly righted himself to score for the second goal of the match.

The last game was against Bristol Pittbulls a significantly more experienced team than Oxford who used superior strength, speed and tactics to win 3 nil. 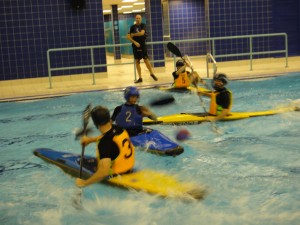