Firstly, there is faff, which is basically where a bunch of kayakers attempt to get themselves organised as efficiently as possible, but never quite manage it. Faff is not something I had come across before I joined the club, but it’s this wonderful part of club life that you quickly get used to and secretly come to love. I’m fairly certain somewhere it is written, “OUCKC – faffing since 1952”. A rather fitting slogan.

For example, one of the first things we had to do was get our boats out of the shed. If we could do this with no faff, then we would just get the boats out of the shed. However, when an OUCKC paddler attempts to get their boat out, they nearly take out an overhanging light and a fellow paddler in the process, trip over an inconveniently placed buoyancy aid and stumble outside only to lose grip off their boat so that it tumbles unceremoniously on to the ground. Yes, I admit that was me faffing about with my boat. Actually, most of the other paddlers were a lot more graceful about it all, and we soon had our pile of kit assembled while we waited for the others and their cars to arrive.

The car that I would be riding in was heard before it was seen. It was squeaking as it trundled down the lane, and genuinely creaked to a halt. Quite possibly one of the best cars I have ever seen. Hannah and I were subsequently buried alive under various bags in the back, and we were off in a cacophony of squeaking and creaking to the well know establishment of haute cuisine, Aldi. The mission: to get enough food to feed fourteen hungry paddlers over a weekend under budget. Did we succeed? Yes. I’ll be honest, it looked a bit dicey there for a second, but we bravely pulled through and even went back to rescue some flapjacks that had been left behind.

The rest of the journey was a lot less eventful, although there was a cheeky tea (and Belgian chocolate caramel shortbread slice) stop on the way. There was also a brief moment where it looked like we were about to crash in to some horses, but we managed to dodge them and the sheep rather expertly. We were also entertained with stories of the great Maple Syrup heist that occurred a few years ago and we were informed of the potential dangers of catfish (no, I don’t know how we got on to these topics). We eventually arrived at our bunkhouse in the middle of the Dartmoor moors, and of course Chris had once again used the force to get there first. 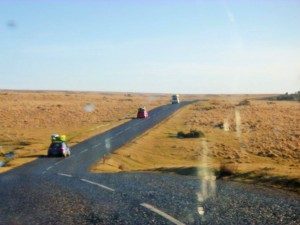 The following morning, after an expertly cooked breakfast from our resident chef Cormac, we headed to the Dart Loop. What followed was, shall we say, scrapey. The water levels were rather low, and there were a ridiculous amount of rocks. Nevertheless, we got to practice skills such as ferry gliding and eddying in and out and how best to right oneself when you’ve hit a jolly big rock. Some of us beginner-y folk were even sent down some of the rapids first so that we could practice picking the line. For the most part this worked very well, until one of the fairly new people unexpectedly found the river disappearing over a drop, which in higher levels of water is known as ‘washing machine’. Incidentally, she picked a very good line and handled it very well! Well, there may have been some screaming, but that only added to the excitement. And I will admit that some of that screaming came from me.

There were a few swims due to all of the inconveniently placed rocks, but everyone paddled really well and us beginners felt like we were making progress. There was even one beginner who had never been on white water before and had only done a few Sunday sessions, who paddled brilliantly and did not take one single swim! 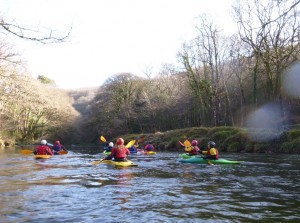 The get out was at a country park and involved a slightly too long portage up a hill. But we managed it and arrived at the car par to begin our tasteful car park changing act which we all have down to a fine art. Once we were all dressed, another paddler from a different club came to tell us that there were showers and a changing room for us to use round the corner. Great. 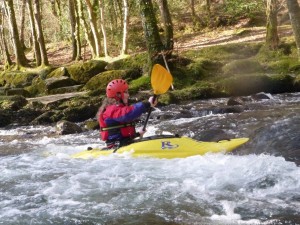 After a bit more faff, we got all the boats and kit on or in the car, and headed back to our bunkhouse. We then had a nice chilled evening chatting and drinking (I personally hit the tea), and there was also a game involving listing as many things as you can within a topic. Some of the more PG rounds that I’m allowed to type in this article included naming as many different kinds of biscuits as you can, and as many Harry Potter characters as you can. Our head cook then whipped up a delicious beef stew, and an equally tasty veggie version too. As it was Matt’s 21st, we even had some chocolate cake which involved the interesting task of cutting a square cake in to fourteen pieces. He sensibly cut it in to fifteen pieces, and then he was given the challenge of eating the last piece as quickly as possible. I believe he managed to annihilate the piece of cake in under ten seconds? 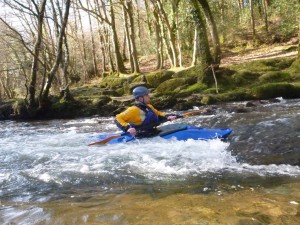 The following morning, all the self-inflating mattresses were deflated, everyone collected the thermals that were hung up anywhere and everywhere, and we all set about cleaning the bunkhouse, ridding it of that wonderfully indefinable smell of river. After a very efficient clean up job with minimal faff, we headed to the river. We split in to two this time, with the more experienced paddlers giving the Upper Dart a bash, while the others took the beginner-y people down the Dart Loop, with the added bonus of the Lower Dart for the more energetic. We had another scrape-y, but nonetheless enjoyable bob down the Dart, and we all reconvened at the country park carpark ready to head back to Oxford.

All in all, it was a great weekend and very beginner friendly. If anyone else is thinking about having a go at some white water, then they definitely should join us on the next one! 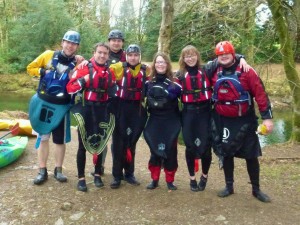